On this page I plan to report various things about myself, my family, and – so far – about my battlefield tours in France.

Started April 15, 2012; edited December 19. This page may give the reader the impression that I am a graveyard ghoul. Quite correct - I love visiting graveyards, not only those of the military kind. This year, I have visited two very lovely places and have secured nice pictures of them. 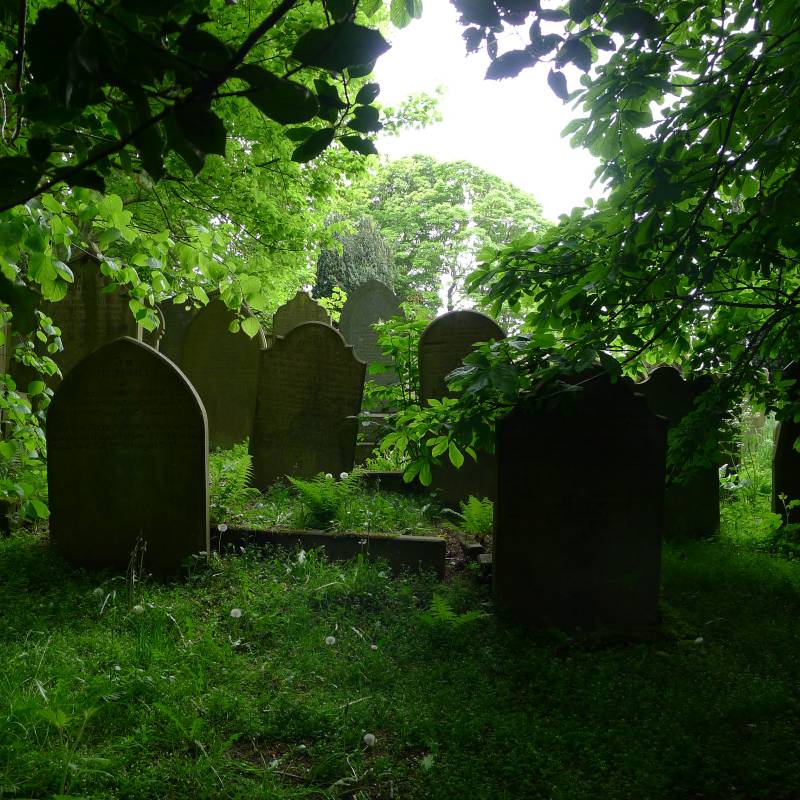 This is the churchyard of Haworth, Yorkshire, England, where the Brontë sisters grew up. June, 2012. 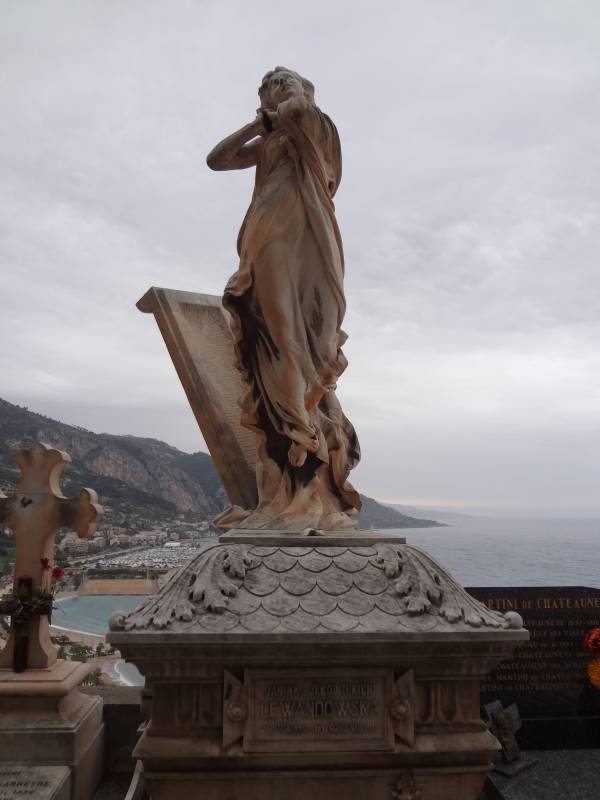 The churchyard of Menton on the French Riviera is located right at the summit of the old town fortress (the Acropolis) and offers a splendid view of the town itself and the Mediterranean. This was a rainy day in November, 2012. The promontory in the background is Italian territory.

I have done six trips to France in order to visit battlefields. This usually means visiting monuments and cemetaries, as they are usually placed very close to the different battlefields (often where there was a forward dressing station). So far, I have seen the Belfort and Vosges front in the south, the Verdun and Argonne front in the centre, and the Somme front in the north. Still to be seen: Flanders (British Expeditionary Force front) and Chemin des Dames (French army).

The dates are:  March 23 to 27, 2007; March 30 to April 3, 2008; March 29 to April 2, 2009. On these three occasions I travelled alone, flying from Stockholm Skavsta airport to Paris Beauvais, by Ryanair, and renting a French car. I found my bases at various hotels at Arras and Albert. These tours concerned both the Somme front (from Albert south to Amiens), where the British did their disastrous experiences in large offensives, and the Artois  front (west and east of Arras), where the Canadian army corps in April 1917 took Vimy Ridge, an objective that both French and British formations had failed to conquer. There are also memorials and battlefields from the periods when the French fought over this area, particularly the Lorette ridge.

In 2010 I planned to do an autumn tour to the Flanders front, driving my own car down from Stockholm, but owing to the many roadworks on the German Autobahn, I toured central Germany instead. Very nice, plenty of modern history (the fall of the Wall), but no war memorials.

In 2011 cousin Lars-Erik and I toured the Somme and Artois fronts together, from May 12 to 16, staying at an Ibis hotel outside of Arras. The Ibis hotels, in my experience, are decently priced and located on the outskirt of towns, where they can offer free parking. Decent restaurants, too.

In September I did a new tour of my own, this time flying from Stockholms Skavsta to Paris Vatry (also known as Paris Disneyland) airport. The fronts were quite new to me: the very southern end of the line, where it touched Switzerland. I stayed at an Ibis hotel  at Danjouting (a suburb of Belfort), and followed the part of the front that was actually on the German side of the border. This area was on the whole very quiet all through the war, as the German Emperor had made an early decision not to attempt an attack on the Belfort defences. The French desperately tried to take a couple of heights at the southern end of the Vosges district, that is, the  Hartmanswillerkopf and the Lingenkopf. The French elite mountain rangers were massacred by second-rate German units holding very secure positions on the heights. The French survivors, on the other hand, learnt a lot from their failure and were eventually to become the teachers of modern infantry tactics to General Pershing's American Expeditionary Force.

After this drive to the south, I turned northwards to the Verdun area, passing the other two fortified places, around the towns of Epinal and Toul, on my way. Verdun is a town situated on the Meuse river, which runs northways in a wide valley, bordered on the east by a rather high ridge. It was the northernmost fortified area, constructed after the French defeat of 1870, when Alsace and Lorraine were turned into the German provinces of Elsass and Lothringen. Some forty forts and fortified places surround Verdun. The Germans, having conquered French territory to the north of Verdun and entering the Argonne forest, then took the battle some thirty kms south of Verdun, capturing the hill and the town of St-Mihiel (including the fort at Champ des Romains), thereby cutting of the railway, the highway, and the Meuse river canal which connect Verdun with the south of France. Then they took the heights to the north of Verdun, running east to west and dominated by the hills called Mort-Homme, Cote 304, and Vauquois. The latter hill offered them a fine view of the Paris – Verdun railway: anytime they spotted the smoke of a steam engine, their artillery destroyed the train. Finally, on February  22, 1916, they went for Verdun itself from the east, attacking and taking two of the most important forts, Douaumont and Vaux. The fighting all along these two frontlines was desperate, but the French held out agains all odds, and retook the two forts late in 1916. The battle of Verdun was not concluded until late in 1918, when the AEF first took St-Mihiel, then joined the French army into re-taking the Argonne forest and continuing east towards Lorraine.

I also did a short drive north to view two of the main AEF memorials in the Argonne area, the giant monument at Montfaucon-d’Argonne and the huge gravesite called Meuse-Argonne at the hamlet of Romagne-sous-Montfaucon.

I have just come back from this year’s tour, which concentrated on the Argonne and Verdun sections. This time, I had company: Marcus Dahlberg (husband of my colleague Lena Dahlberg), and my colleague Georg Stenborg. They had never done a battlefield tour before, but I think they consider this one a success, although it only lasted for two full days (and two days of travel), April 11 to 14. We certainly saw battle areas in plenty, mainly the same sights that I had visited in September 2011, except for Vauquois, which was a novelty to me, too.

The two AEF memorials are magnificent, although in different ways. The Montfaucon monument is very self-asserting and a memorial of a victorius army.

The Romagne site is beautiful and sad and commemorates the loss of and contains the graves of more than fourteen thousand dead U.S. servicemen.

As I started my touring by visiting the British and Commonwealth monuments in the North, I got used to seeing monuments built to mourn the loss of life, not monuments praising martial triumph, so personally I prefer the former kind. The national monuments are very different in character and it is interesting to compare them.

The AEF monument of Montfaucon differs from its French, British, Australian, and Canadian counterparts by celebrating a military triumph, not mourning a disaster and a loss.

The photos below show it in two views: the first as you see the monument when approaching it from the road, then as you see it when looking from the ruined church just behind it. 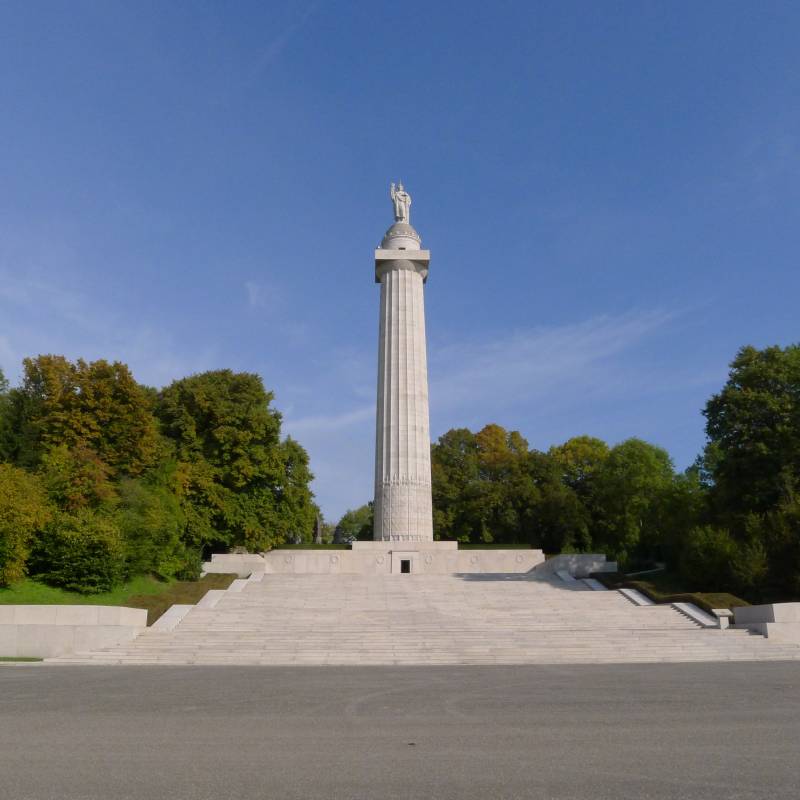 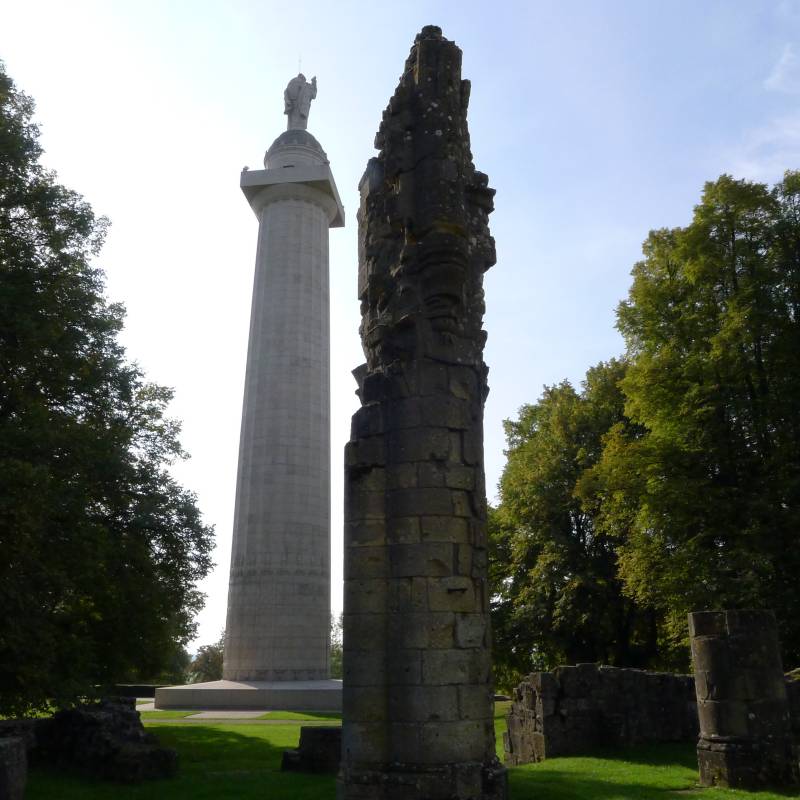 The ruined medieval church - very old indeed -  behind it is also beautiful, although not quite so high. September 2011.

The main Australian monument is situated on the left bank of the river Somme, to the east of Amiens. It, too, commemorates the names of the fallen; it also contains numerous battle scars incurred in 1940, when German and French troops fought over it.

Not so high as the AEF one, but, standing on the top of a ridge, it commands a wonderful view of the surrounding countryside. May 2011.

Wiew from the observation platform of the Australian monument, roughly north. The town seen in the distance is Corbie, with the large abbey church in the centre (actually the place where St. Ansgar, the 9th Century missionary who christened the Swedes, came from). May, 2011. 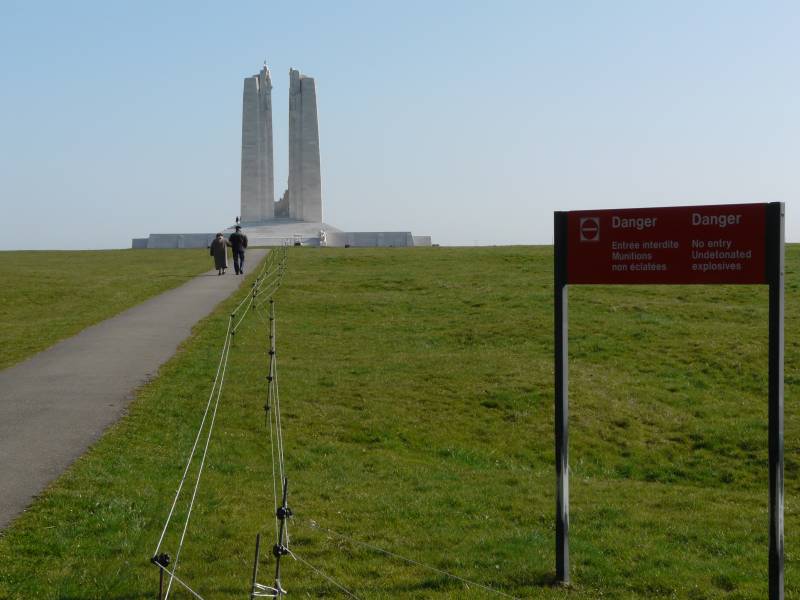 The Canadian monument stands on Vimy Ridge, on ground given to the Canadian people by the French Republic. That was the very ridge the Canadian army corps took by assault in the middle of April, 1917. The wired-off area is still dangerous with unexploded munitions, almost a century later. Unlike the other national monuments, which are maintained by local, French labour (as it seems to me), all Canadian monuments are staffed by Canadian students, doing a three-month stint in France. A very good way of learning about your national history. April 2009.

The Canadian monument again, looking north towards the battlefields of Flanders and the mining districts of France and Belgium. April 2009.

The British and Commonwealth war graves are some one thousand in number and distributed almost at random in those areas where the BEF fought, namely (during World War One) in Flanders, Artois and Somme. The monuments of World War Two are mostly located in Normandy. They are all to the same design, but of varying sizes. 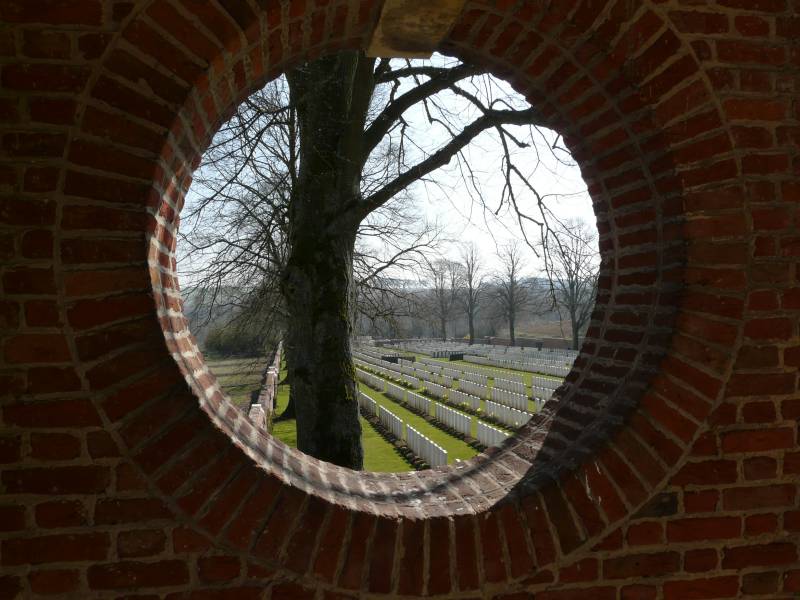 This, at Beaumont-Hamel, is my favourite. It looks over the valley of the river Ancre, a small merry stream that has created for itself a wide marshy valley, often with very steep brinks. April 2009. 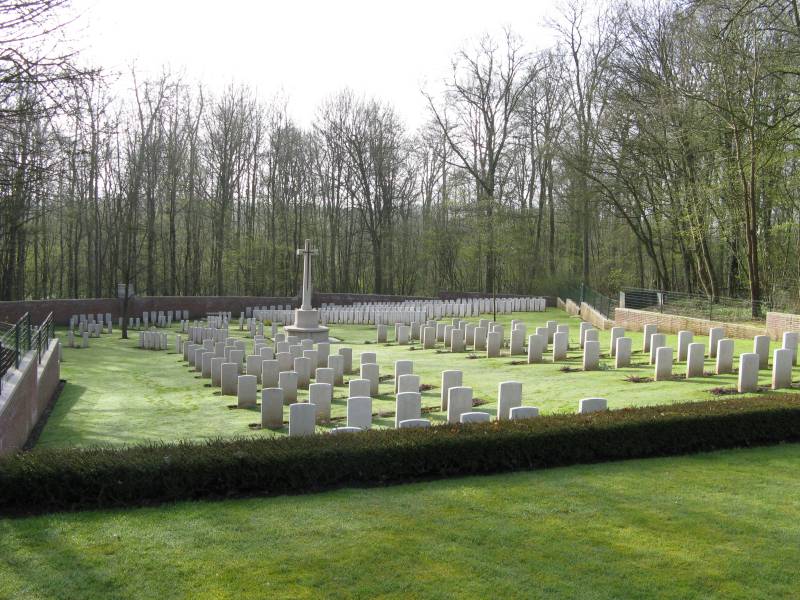 Another favourite is also located in the valley of the Ancre and is very beautiful in early spring. You can't beat the perfection of the British lawns! April 2008. 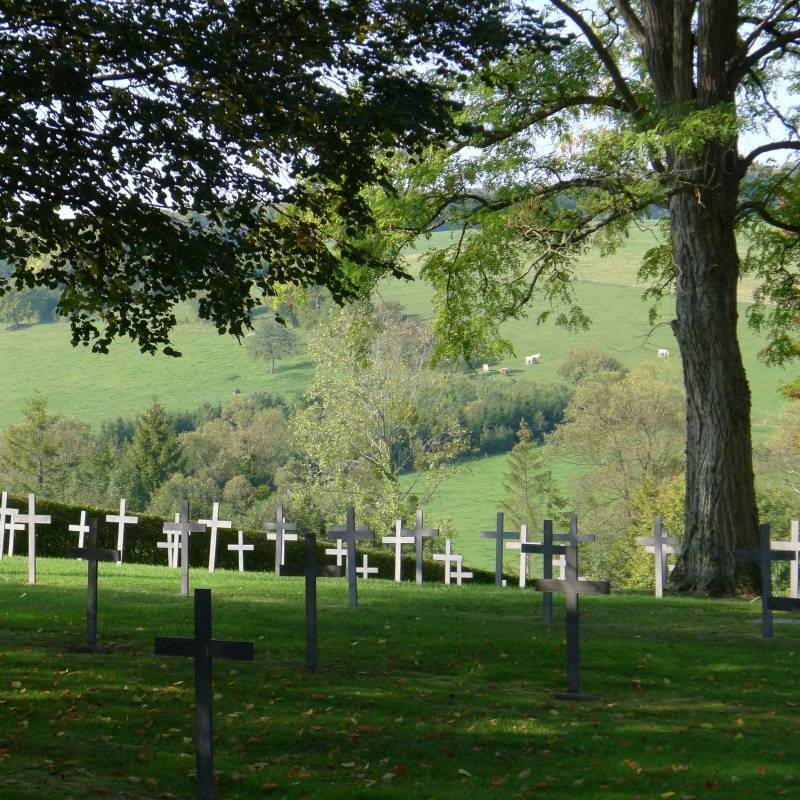 The Germans, who lost the war, lost most of their dead, too, but they have been afforded some gravesites, which were originally planned by the French authorities but are nowadays cared for by a German organisation. Every iron cross carries four names (two for each cross-bar, front and back), which explains their wide spacing. The site above is right east of the Caures wood north-east of Verdun, where the first shells of the Battle of Verdun fell on February 21, 1916. In the wood, the French were waiting, and the vicious initial German artillery bombardment did not stop them from claiming casualties. September 2011. 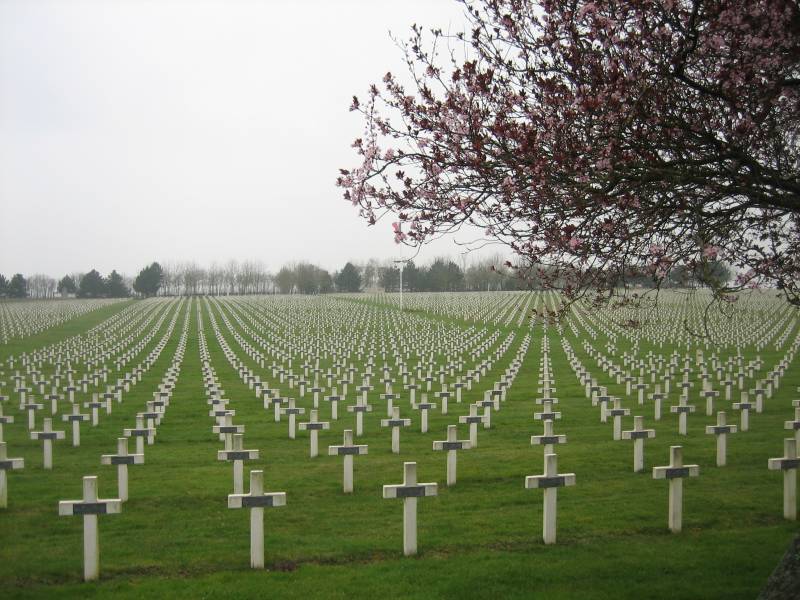 The French national monuments are rather disappointing and depressing. Crumbling concrete crosses with narrow bronze plaques. The geometrical patterns they create are dizzying, though. Even the lawns are rough and unkempt. The French actually served their dead enemies better. The above site is a very large one belonging to the Artois front, at La Targette close to Neuville-St.-Vaast. The French fought bitterly here in 1914 and '15, until the BEF took over this section of the front. They all tried - without success - to reach the top of the ridge above Vimy village. 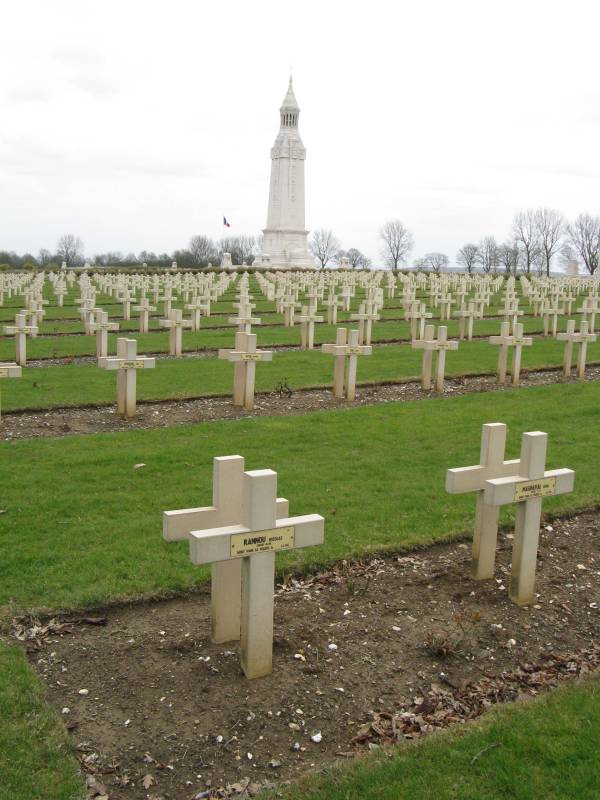 The French national monument at Notre Dame de Lorette is immense, a memorial to the bitter fighting that took place on the Lorette ridge in 1914 and 1915. 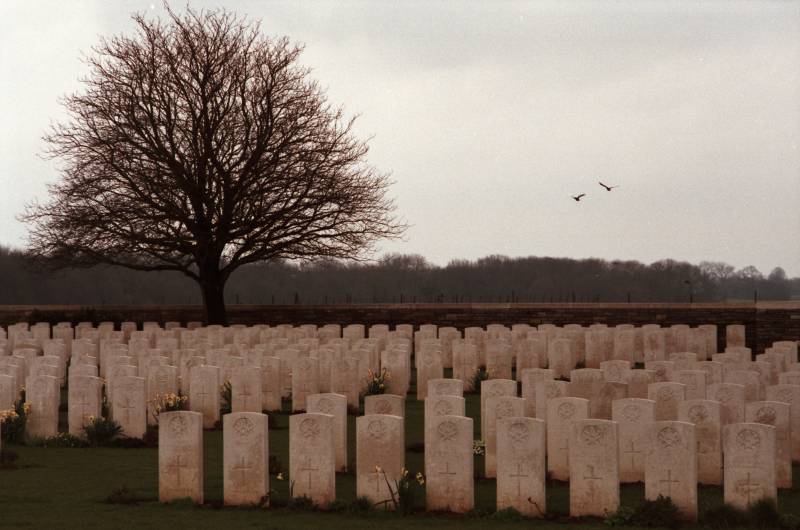 In the right kind of weather, even in the daffodil season, there is a monochrome restfulness to the countryside. You would not think that a modern four-lane motorway passes right behind the wall and along, but it does. On the far side is the eastern end of the Vimy Ridge.

The AEF gravesite at Romagne is, as I said, extremely beautiful. Below are five views, taken in September 2011 and in April 2012.