The war graves administrated by CWGC (The Commonwealth War Graves Commission) contain three fixed elements: the bronze Sword of Sacrifice affixed to a limestone cross, the rectangular Stone of Remembrance with the inscription THEIR NAME LIVETH FOREVERMORE, often also a small building like a temple, all surrounded by magnificent lawns tended in the British way. The materials used are limestone and red brick, which are a combination extremely pleasing to the eye.

The whole complex is contained within walls of brick and limestone or by hedges. They were designed by three distinguished architects of the early 20th century.

The graves themselves vary enormously in number, from a dozen to hundreds (or even thousands, I have not counted them).

The headstones themselves are fascinating: a rectangular block of whitish limestone, about one decimeter (four inches) thick, always blank on the reverse side.

Despite this apparent uniformity, they are highly individual, the chief elements contributing being the shape of the top of the stone which identifies the nationality of the fallen, the emblems inscribed, the identity of the fallen soldier (one to each stone), and the family's inscription at the bottom.

There will be lots of pictures. As a starter and in order to create the right impression of a military monotony, I start this treatise with pictures of French military cemetaries with individual graves, the German equivalents (actually created by the French in the 1920s), and the American war graves at Montfaucon (in the Argonne region). 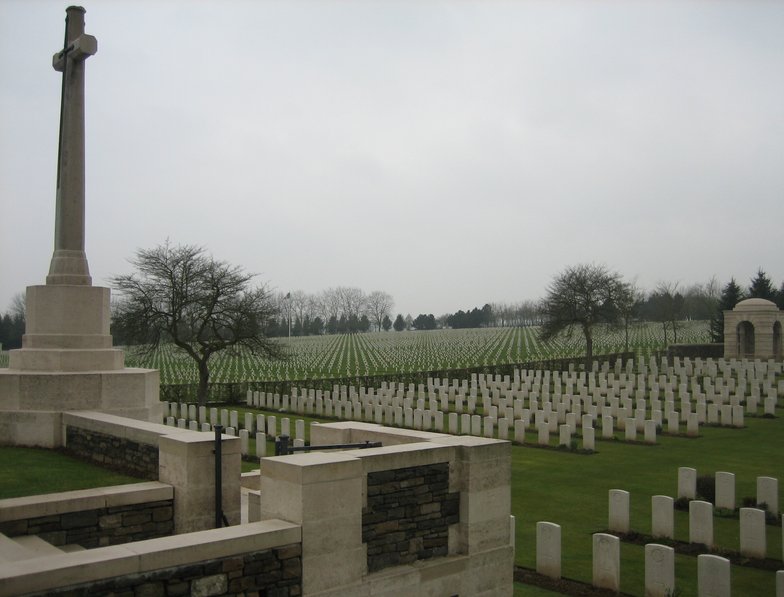 Outside the village of La Targette in the Artois, south of Vimy Ridge, there is a giant French churchyard (in the background) with a smaller British one as its neighbour. Together, they offer a vision of military uniformity, particularly on a grey day in March. 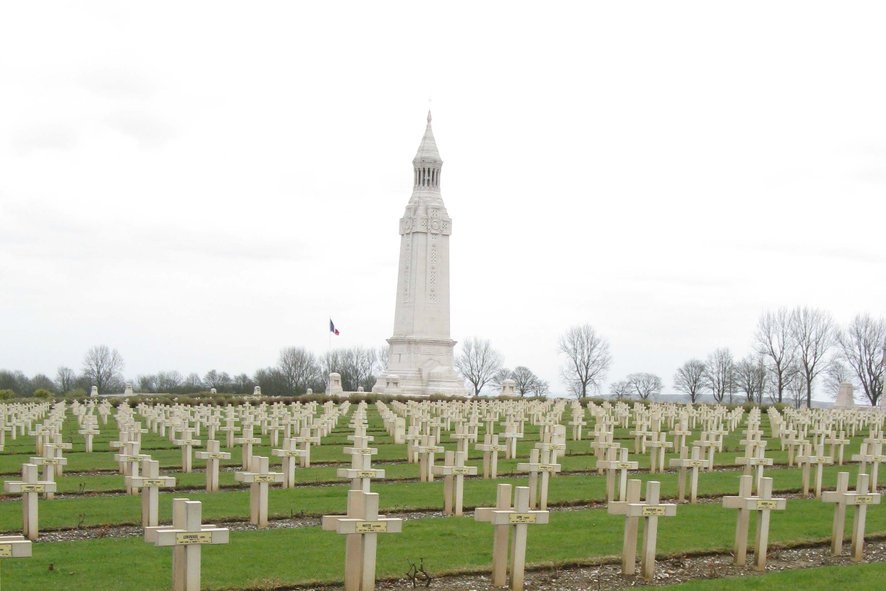 The French National Cemetery at Notre Dame de Lorette (Artois front) shows the monotony, impressive and sad: the crosses stand back to back, carrying a pale label with the barest personal details. 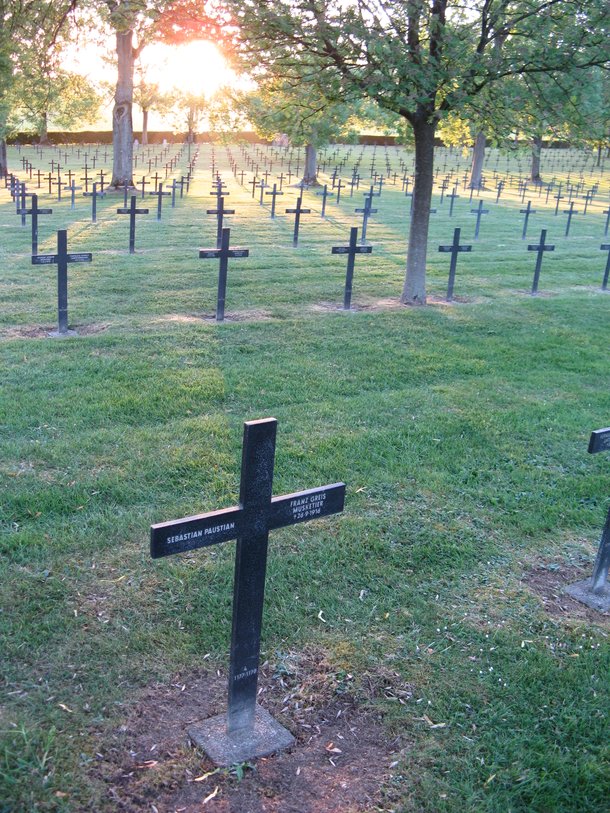 The German war graves were actually created by the French, in the 1920s, and are also monotonous, but in a different way. The black crosses usuallly carry four names, one on each arm, front and back. But their black silhuettes are impressive and offer the ambitious photographer a much more rewarding subject.

Sebastian Paustian, whose name is inscribed on the left arm on the nearest cross (left), is not the original occupant of this grave. It belonged originally to the Red Baron, Manfred von Richthofen. His body had been interred by the Australians in a churchyard at Bertangles, closer to the place where he crashed but was removed here, to the Soldatenfriedhof of Fricourt. Even later, it was taken to his parental home in Germany only to be removed once more, before the arrival of the Russians. 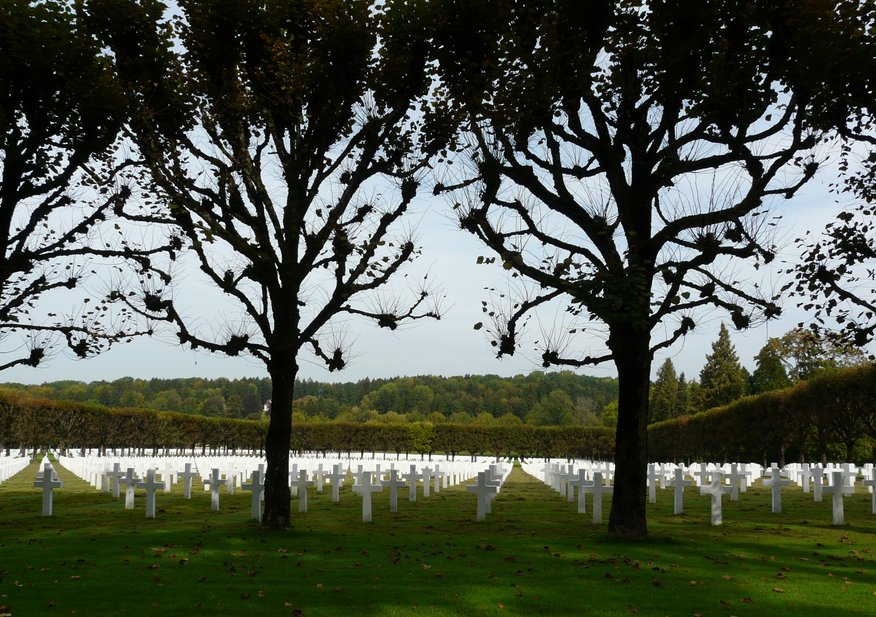 The memorials of the fallen US soldiers are so white they almost blind the camera and are very impressive en masse. Above, Montfaucon, the great cemetery of the Argonne battles in 1918.

Seen at a distance, all these stones and markers are identical and create an impression of melancholy and monotony. The impression does not change much when you look at the French, German, and American markers close up.

This was written to create a background to my story. Now for the saliet points.

The stones created by CWGC are identical in one sense - they are all basically rectangular and hewn out of white sandstone. But most of them has some individual trait.

When nothing was known about the body found - no uniform, no ID-disc (the British ones were made of cardboard), no regimental badge - the gravestone used is of the British pattern (this will be explained below), and the inscription the simplest possible, without conjectures as to nationality. Below is one example. 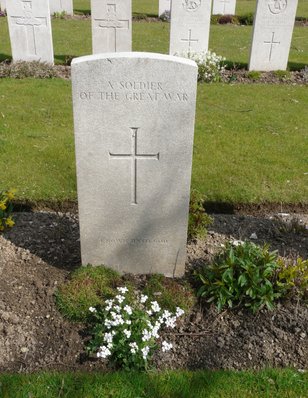 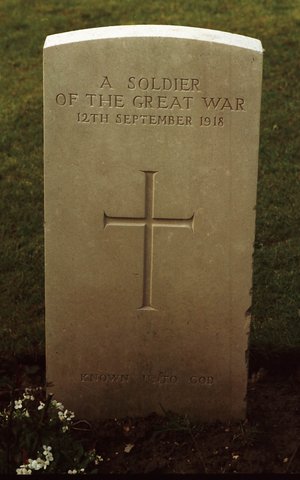 Whenever further details were known, these were added at the appropriate place. Right: An unknown soldier who fell on the 12th of September, 1918.

The stone has three basic elements: the head inscription "A Soldier of the Great War", the cross (the general assumption being that the soldier was a Christian, not a Jew, a Moslem, or a Hindu), and the personal note "Known unto God".

The rounded top edge of the stone implies that the man was believed to belong to the vast British Empire of many nationalities, most of which sent their troops to the war.

Thus, two tacit assumptions: A Christian of the British Empire. 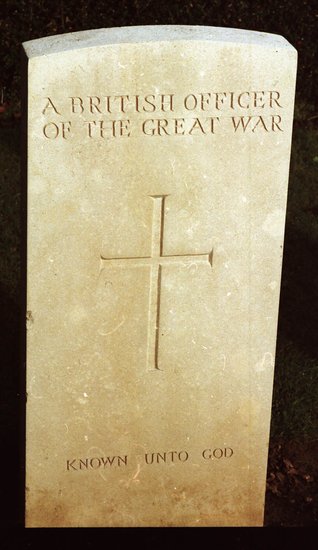 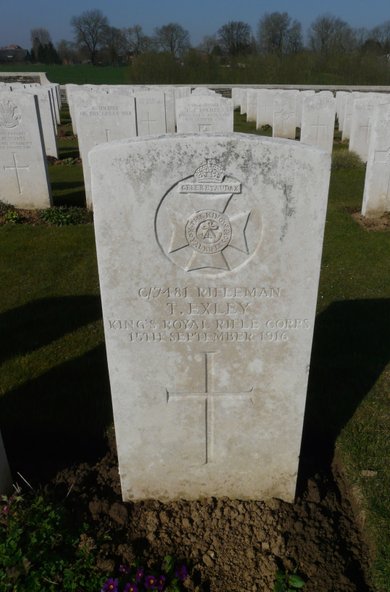 Right: This stone features the regiment badge, the rank and number of the dead soldier, with the cross positioned at the bottom.

The regimental motto, Celer et audax, means "Quick and Daring". The King's Royal Rifle Corps was originally raised as The Royal Americans, from American colonists, that is, before the American Revolution; it ranked as the 60th regiment of foot in the British Army list. It has later merged with other regiments.

The motto itself is correctly spelled on this stone, but I have found instances of false spellings (the proof will appear below) - a very rare thing.

Left: An unknown British officer has found his final rest. It is tempting to speculate about the material evidence: the badges of rank were shown on the lapels of the uniform, but the English and Scottish lapels carrying the officers' stars were arranged differently. Since the wording is so general, it is possible that only a few shreds of material were left, showing the higher quality of the officer's uniform as compared to the rough wool of the privates and N.C.O's. 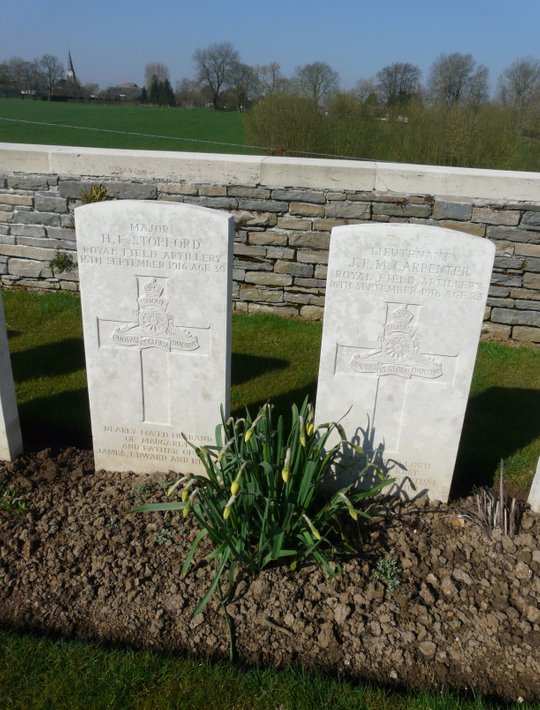 Left: These two artillery officers demonstrate the most complete information that can be offered on a British stone: Regiment, name, rank, date of decease, and - bottom - an inscription made by the family.

The two stones (above and left) both represent casualties of the Somme front, during the great battle that started on July 1, 1916, and continued until November. 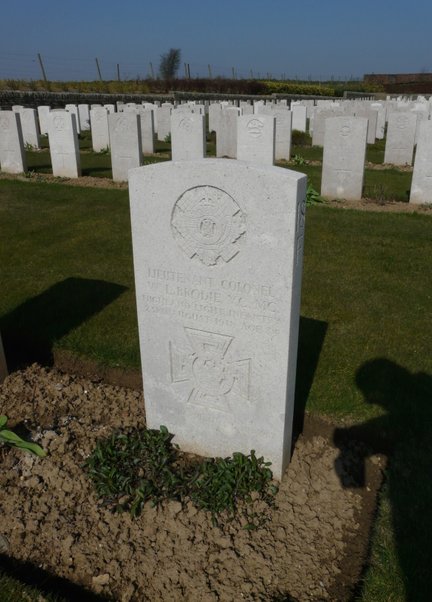 Left: This is the highest-ranking and most decorated officer from the most prestigious regiment that I have found - a Scottish Lieutenant-Colonel who had been awarded the Victoria Cross and the Military Cross. Only 34 years old, he fell during the great 100 Days Offensive in the autumn of 1918, when the Germans were finally put on the defensive.

I accidentally included my own shadow in the picture.

The CWGC cemeteries were of course created after the War, usually on the spot where there were already a number of graves. Unlike most other belligerents, the British prefer to bury their dead where they fell and do not bring the bodies home.

Sometimes, during this process, the bodies were lost although records showed that they ought to be there. The three graves below demonstrates this sad fact - three soldiers who were probably interred within the borders of this cemetary but nobody knew the precise spot.

All three of them received a tribute from their families. 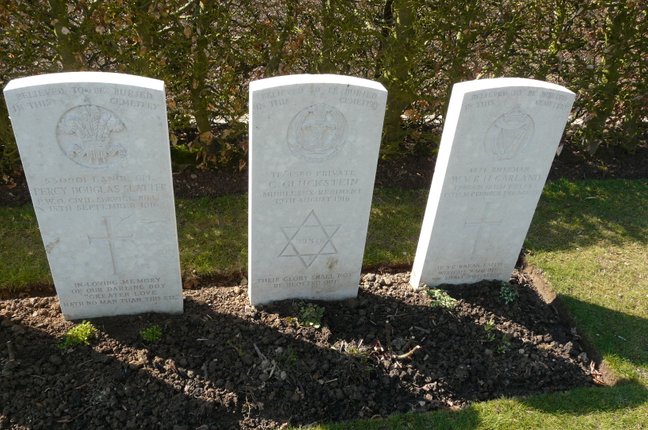 British-made Graves for Soldiers of other Nations

The various nations of the British Empire (or Commonwealth) share the same basic form of the stones, but have their own way of presenting the information. My collection of pictures is not complete, as I have no stones of Indians, South Africans or New Foundlanders (New Foundland was a Crown Colony until 1949, when it joined Canada).

The British sometimes had to bury fallen French or German soldiers and adapted the stones accordingly, usually by giving the top a different shape.

Below: A Canadian and a German form close ranks with two unknown soldiers. 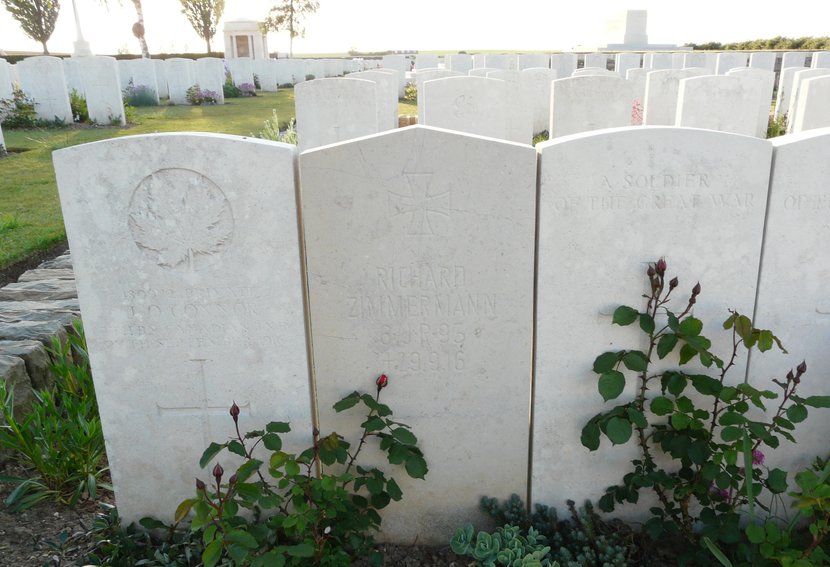 Below: The Australian Divisions of the AIF (Australian Imperial Forces) fought their way up the Albert - Bapaume road during the Somme Battle, leaving a large number of soldiers in the cemeteries and their badges on the stones. 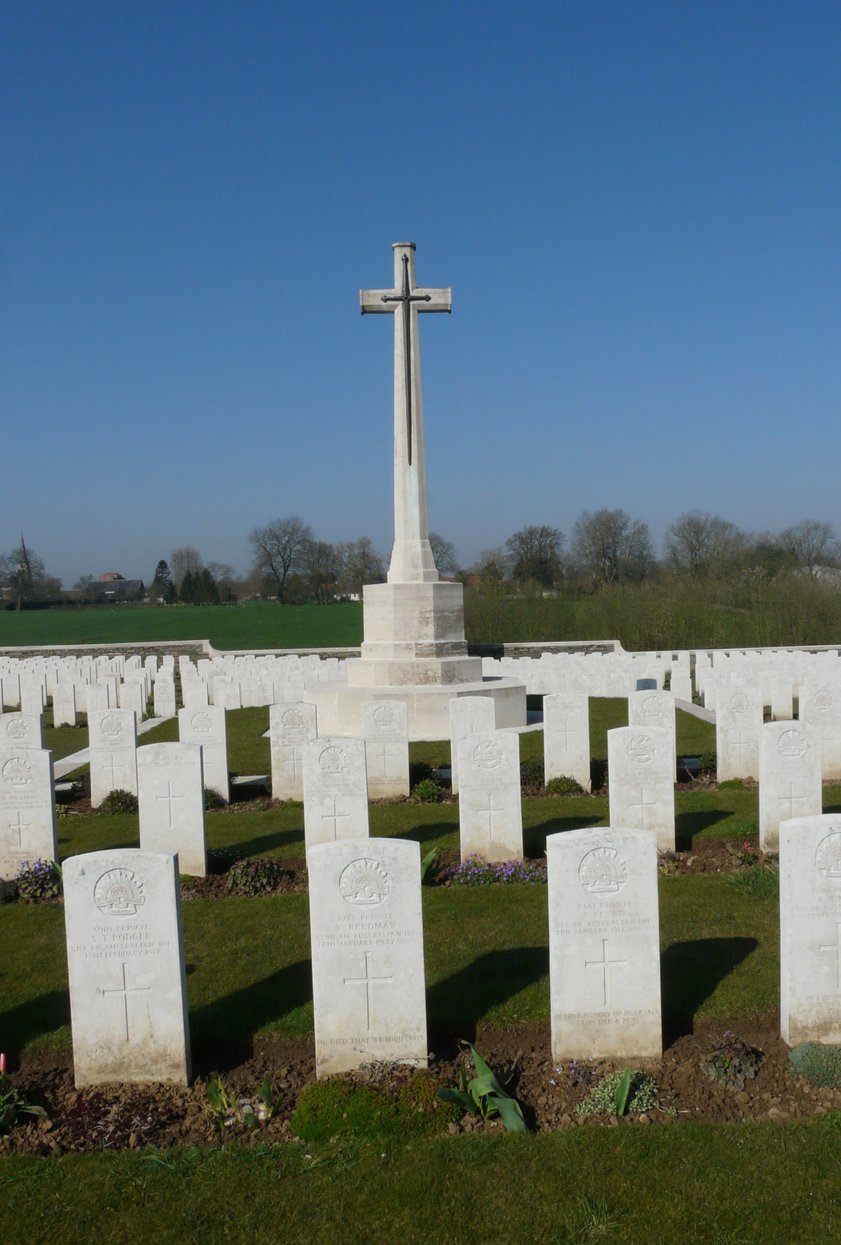 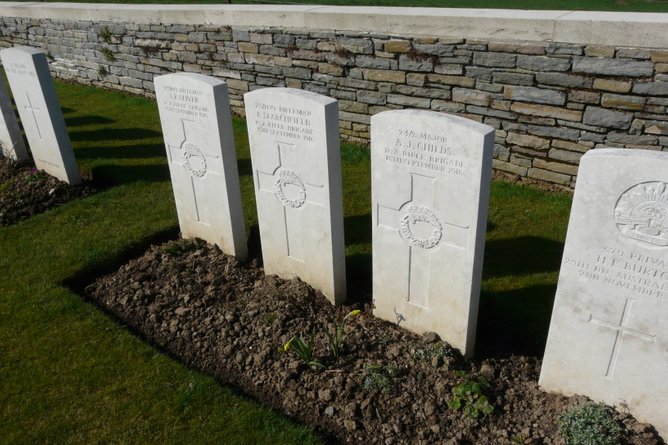 And so did the New Zealanders ...

A row of French graves with handsome  headstones put up by the British.

They take up the whole row just in front of the Cross of Remembrance and the surrounding wall. 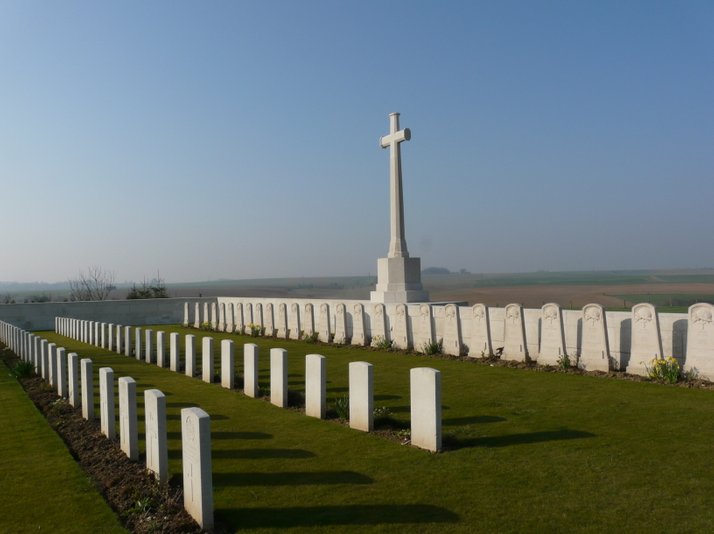 The German headstones of British manufacture come in two shapes, either with a pointed top or with a flat one. The stone with a flat top (right) is one of a pair that stand in the giant cemetary in front of the Tyne Cot memorial, actually right in the centre of the area.

The little wooden cross with the Flanders poppy is the traditional way for the British to show their respect.

The stones with pointed tops (below) stand in a small cemetery between Arras and Albert (I have mislaid the reference). The British soldiers are in the minority here. 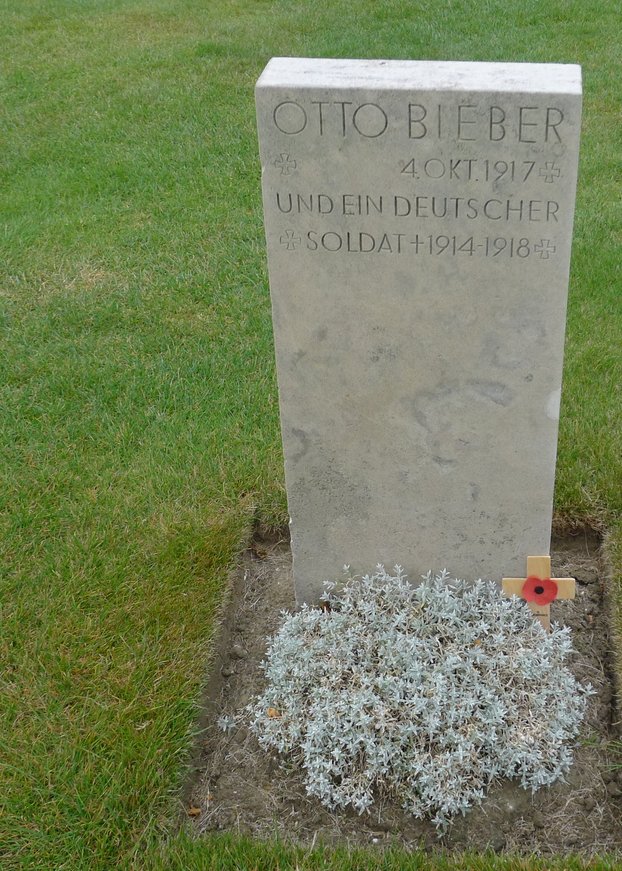 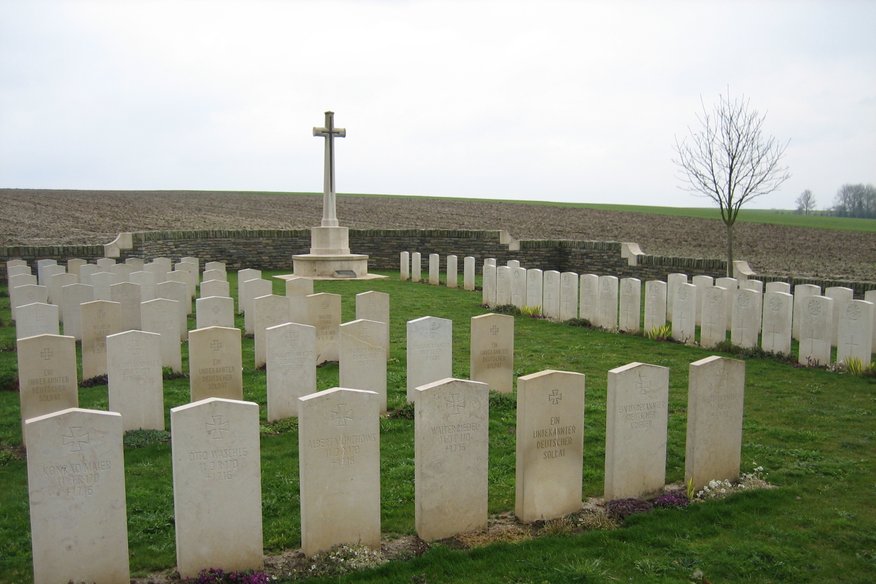