My collection of old slides and negatives is quite staggering and a bit of an embarrassment. I seem to have saved them all - good and bad ones - indiscriminately. But those I thought best then are not necessarily those that I prefer now, so keeping them all was quite a good idea. The slide projector broke down a long time ago, and so did the silver screen. However - it is possible to scan and digitise them. This I will do, and the best of them will appear on this page. Best in the sense of being most interesting to myself or most satisfying as pictures. The viewer will judge!

In the summer of 1965 I was seventeen years old, waiting to start my final year of Grammar School, and hitchhiked from London to Kirkwall (Orkney Islands). I had planned to travel up the east coast in short stages, but just north of Cambridge I got a lift with an RAF fighter pilot stationed just south of Edinburgh and driving a Jaguar E-Type. He drove very fast (I noticed that when coming up on a lorry he first pulled the steering wheel to fly over the obstruction and only after that did a conventional overtaking). I went by way of Edinburgh, Loch Lomond, Inveraray, Oban, Ben Nevis, Inverness, and Thurso. Then south again by way of Glasgow and Stranraer (ferry port) to Ireland: Larne, Belfast, Dublin, Cork, Kinsale (I kissed the Blarney Stone on the way, a feat which was supposed to make me eloquent), Dublin again, Liverpool, Shrewsbury, and London. A wonderful tour that took two months to finish and gave me a good working knowledge of geography and also of the intricacies of the English language. The drivers that offered me lifts were mostly lorry drivers, speaking some strange British dialect, or commercial travellers. In Ireland, I often got short lifts with priests (they often turned off the main road to visit some isolated parishioner, leaving me stranded in the wilderness). The British drivers, learning that I was a Swede, wished to know everything about Swedish Sin (I was 17 years old and could not inform them); the Irish ones wanted full information on the Swedish Social Security system. I had not even a theoretical knowledge of that...

Anyway, I did carry a camera, a folding Agfa taking 6x6 mm frames, very manual in its settings as you decided on exposure by looking at the weather situation (sunny or overcast) and setting exposure time according to a small sheet of instructions included with the film. The camera did have a primitive range finder but it was not coupled to the lens, so you had to enter the distance manually. The rather small fixed F-stop made the camera very forgiving about the depth of field. Anyway, good pictures are not in the camera but in the eye of the photographer.

Somehow, I have managed to keep one film from this tour (others may still be hiding), containing the twelve pictures below. The emulsion is in a very bad shape, so I have doctored them a bit in PhotoShop, tryto hide the most obvious cracks. I have not adjusted the colours.

These photos belong to my tour through Scotland. They are fifty years old now and I hope they may represent more than a private interest. They are very obstinate and difficult to format on this homepage though - that is why they are in different sizes (not intentional). I will keep working on this in the hope that they will come out equal, eventually. 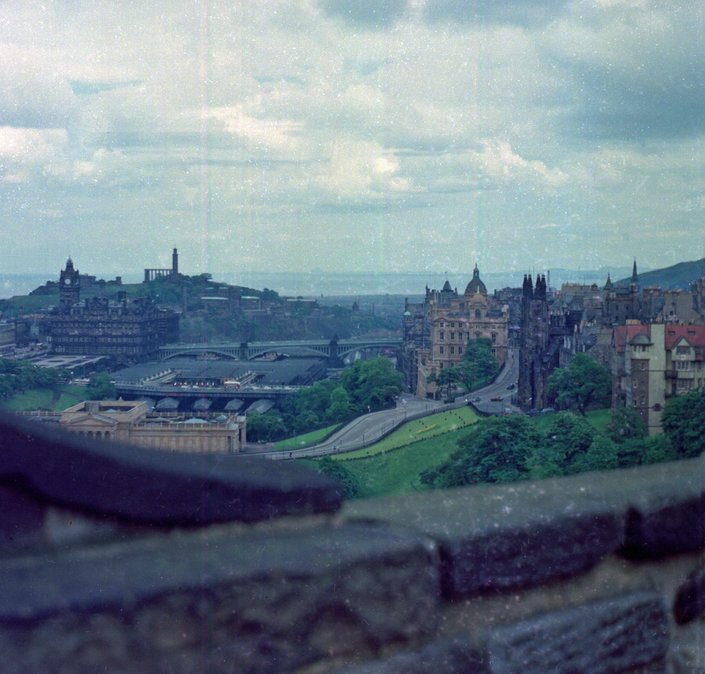 A view of Edinburgh, taken from the castle battlements. Waverley Station in the middle of the picture was a very lively railway station in those days. 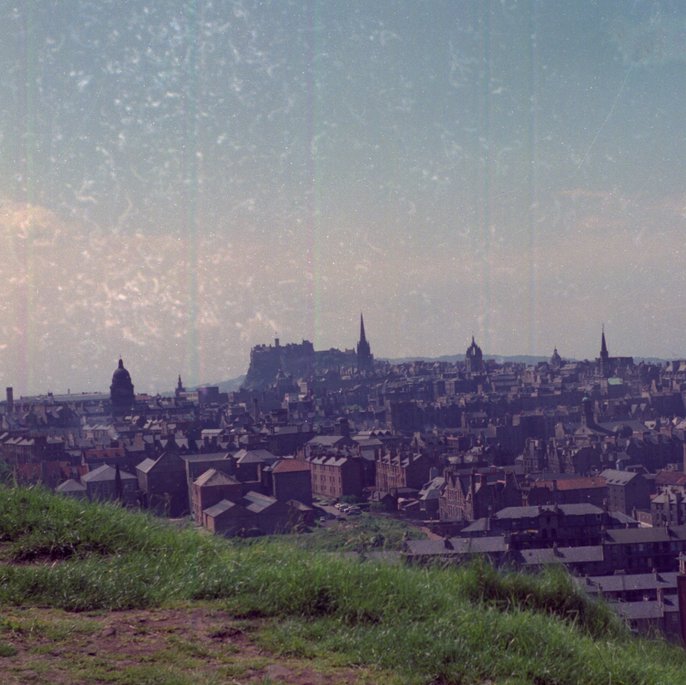 Below: The Royal Palace of Holyroodhouse, viewed from a rock. I seem to have climbed a lot of them on my way, doubtless because they offered a grand view. In the background, Firth of Forth. 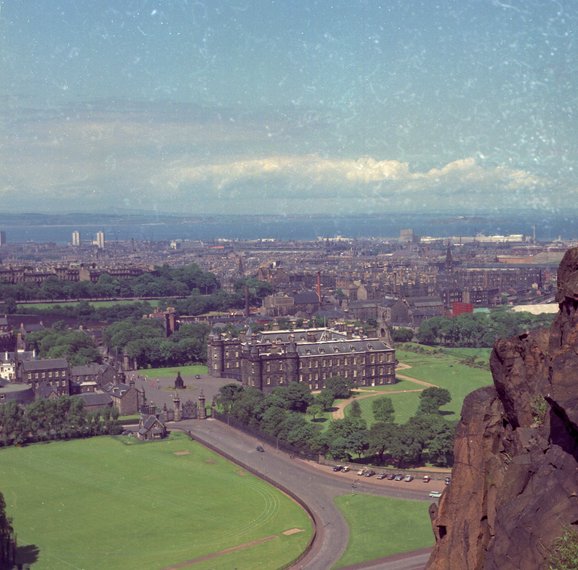 Two more views of Edinburgh taken from the battlements of the Castle (below). The city did not live up to its old nickname of "Ould Reekie". 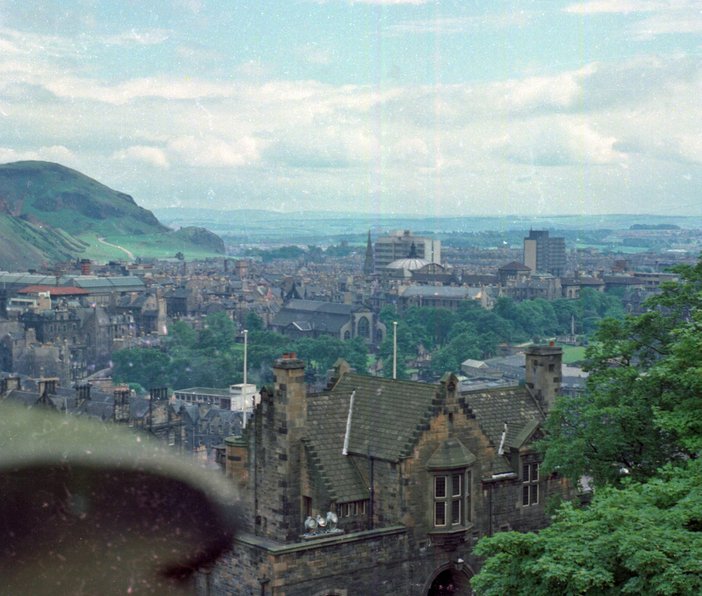 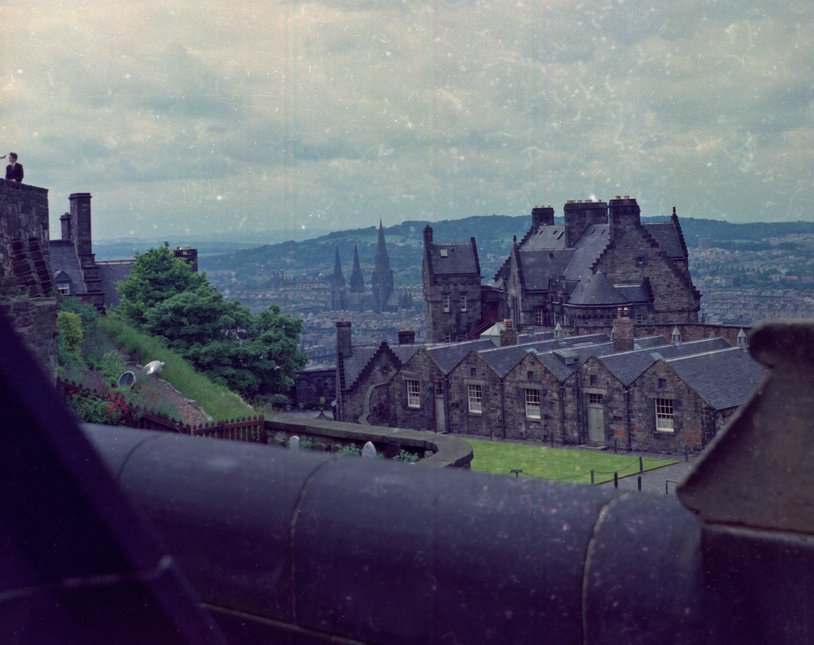 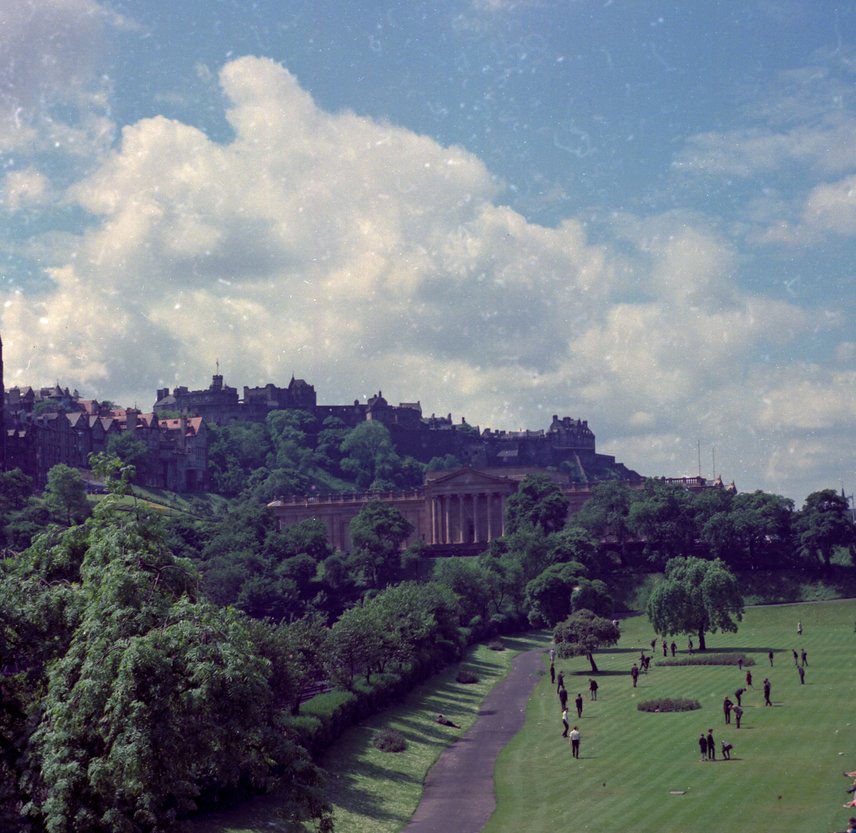 From Edinburgh, I moved due west to find myself at Loch Lomond, which is both a lake and a village (south of the lake itself). To the north, the HIghlands, to the south, the Lowlands of Scotland. A great tourist attraction.

Below: Loch Lomond, where I watched Queen Elizabeth II and Prince Philip pass along the main street, riding an open Rolls Royce. The last car in the long line of escorts was a Volvo Amazon (121), which filled me with patriotic pride.

After this royalistic treat, I rented a rowing boat to get a close-up view of the lake itself and, after rowing for quite a while, landed to enjoy the muddy, muddy shores of Loch Lomond. 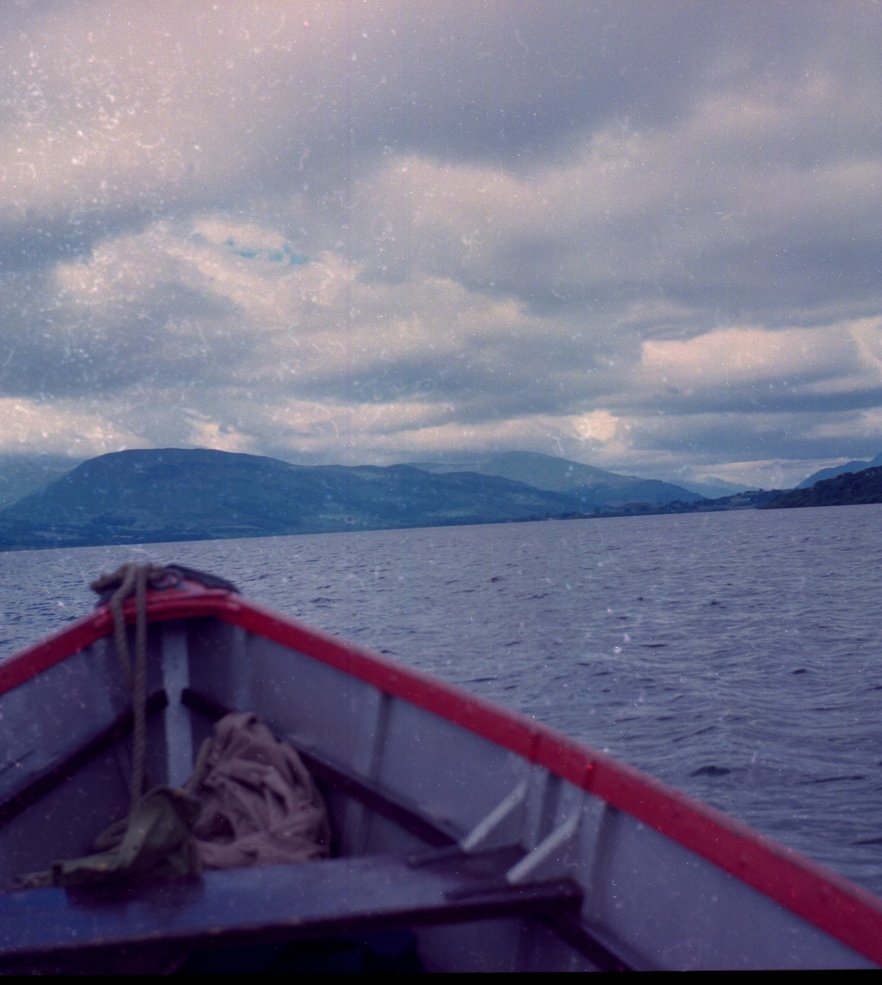 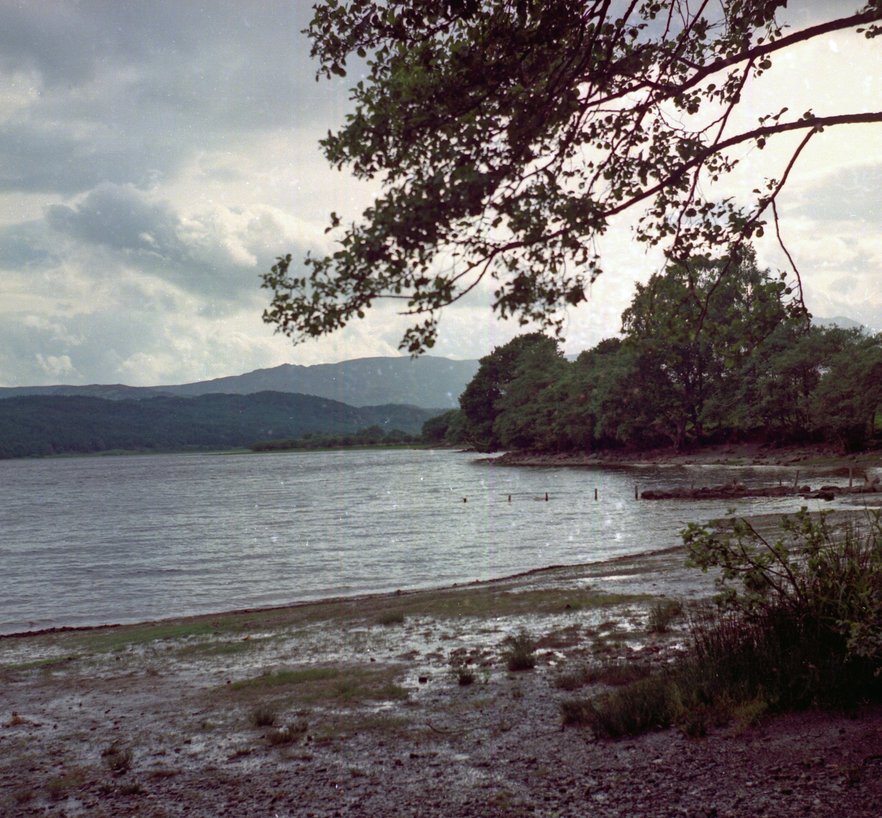 I usually stayed in hostels belonging to the YHA (British Youth Hostel Association), as they offered cheap lodging. Moreover, in those days, you did not have to book in advance. If you made sure to hang around the entrance at 5 pm (the official opening time) you were almost sure to get a bed for the night. If you arrived early, you were equally sure to be shooed away by the Warden, who was generally a rather small, red-faced man, probably an ex-NCO, very military in bearing and extremely irascible towards all lodgers. He liked his privacy and seemed to regard all visitors as intruders. The dormitories were usually enormous and noisy at night. In the morning you did your assigned cleaning chore after breakfast and were out on the road again before 10.30 am. I still have the Handbook for 1965 of An Óige (The Irish Youth Hostel Association), giving all the seventeen rules of behaviour (mostly prohibitions). The quality of the hostels in Britain and on Ireland varied enormously, not in material standard but in the way lodgers were treated. The best I found was that in Kirkwall, not least because the Warden was a young lady with liberal ideas, not a martinet with an honourable discharge from the armed forces. If it rained, and it does rain at least once daily, we could stay indoors all day warming our feet at the kitchen fire.

The most elegant hostel was equally undoubtedly that at Loch Lomond (below) - a palace built for a Glasgow businessman who hade fallen on hard times. Google tells me it is still there today, looking more or less the same. But I assume you have to book in advance nowadays, and are expected to arrive in a car, not on foot carrying a rucksack. 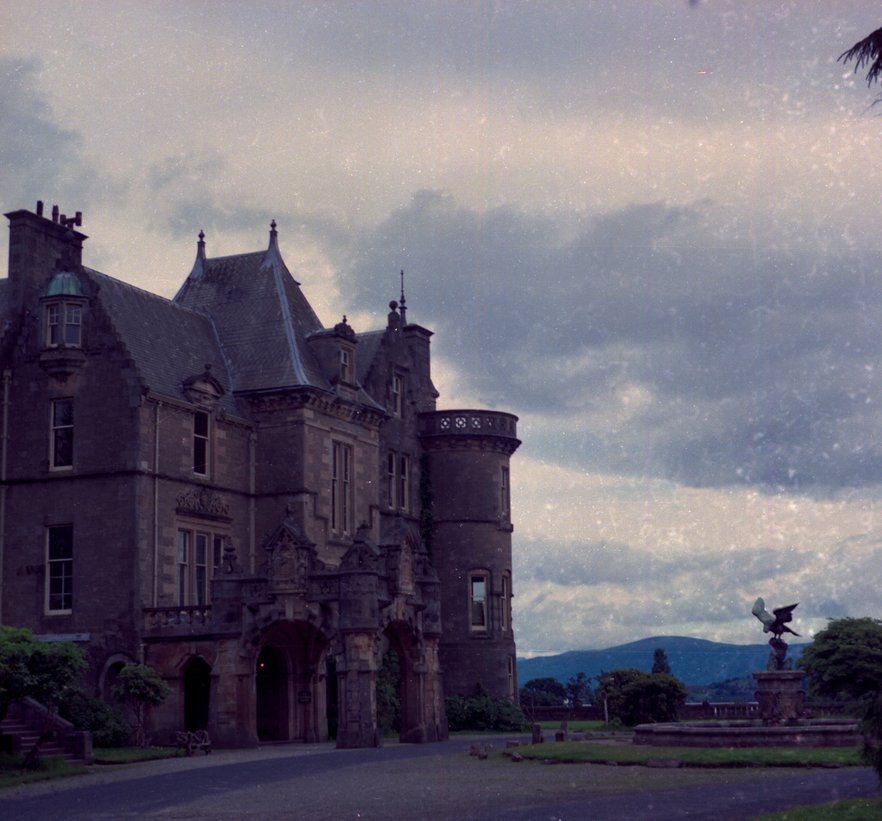 From Loch Lomond I continued up along the west coast, staying first at Inveraray, where the EUDS (Edinburgh University Dramatic Society) on tour gave a performance of Charley's Aunt from a primitive stage arranged in the school house. My first experience of real theatre, as my hometown, Halmstad, had none.

Having enjoyed this performance, I went on to Oban (below), which is a west coast port on the Atlantic, and then across Scotland by way of Fort William, where I made an attempt to climb Ben Nevis. Climbing the mountain (Britain's highest) was not so difficult in itself, but the ground was not firm and dry - on the contrary, it was mossy, slippery and soaking wet. All the precipitation of last winter was on its way down the mountain side.  No fun at all, unless you were wearing rubber boot reaching to your knee. And anyway, Ben Nevis is a pretty high mountain. 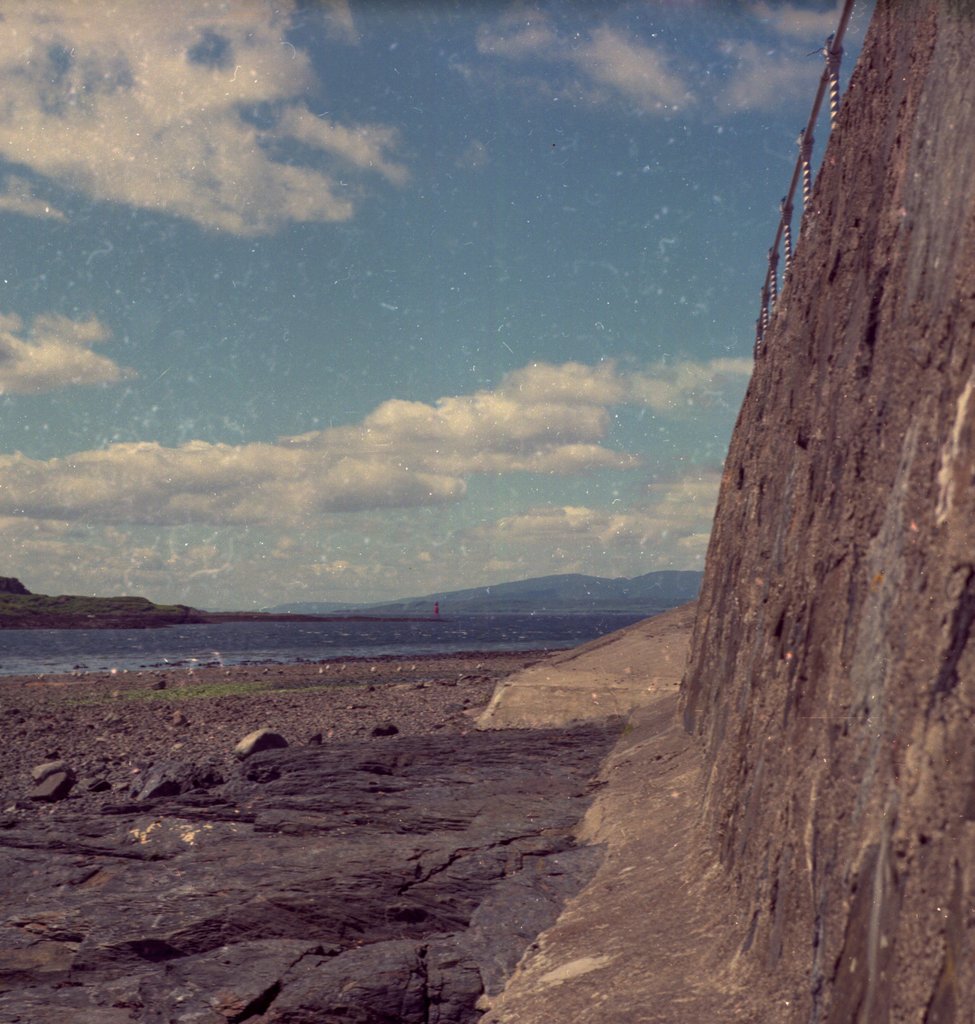 Oban was very cold because of a strong wind from the sea. I still have a letter I sent home from Oban, grumbling about the harsh weather.

Some time after my failed attempt to conquer Ben Nevis, I got a lift with an American student, out on vacation just like myself, and driving a rented VW bug which he raced along the narrow Scottish country roads, north-west to the Atlantic, and then east to Loch Ness. Whenever we met a tractor, a bus, or another car, one of the vehicles had to reverse until reaching a suitable spot for the meeting of cars. Usually the American guy did it, because he found the roads amusing - so narrow but paved all the same. I managed to snap a picture from the car while travelling at speed (sitting to the left, which is the passenger's side in Britain) - I belive it is Loch Ness that figures on the picture below. If not, it is another longish lake. Whatever it was, we saw no monster. We ended up and parted company at Inverness. 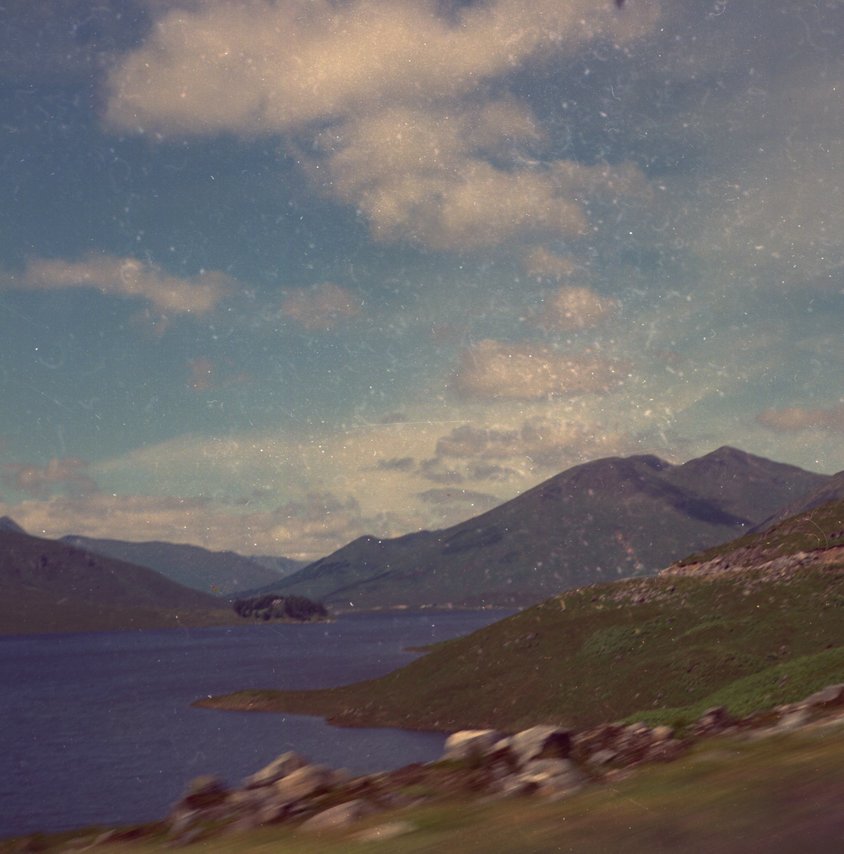 It's a long way from Inverness to Thurso, a village and ferry port, called Scrabster, on the northern coast of Scotland, not quite so far north as John O'Groats, but nearly so. The ferry was run by McBrayne's, famous for their expensive tickets, and sailed to Stromness, the second largest town of Orkney Mainland, passing the impressive vertical western side of Hoy on the way. A very dramatic voyage, where the birds nesting on the mountain side swirled around the ship.

Stromness is a pleasant little town, but I had set my mind on Kirkwall, so there I went and found the nicest youth hostel on the British isles. Also the magnificent cathedral of St. Magnus. The main reason I wanted to see these islands was a novel by Eric Linklater, White-Maa's Saga, which is partly set in the Orkneys. I still read it from time to time: it's a great story of Peter Flett, an ex-subaltern of WW I, a native of Orkney and also a medical student who tries to come to grips with his post-war life (White-Maa, the Orkadian name for the herring-gull, is Flett's nickname).

I also wished to see Scapa Flow, the main anchorage of the Royal Navy's Home Fleet during two world wars. It's just a wide expanse of water, really (below). All the warships are gone. I rented a bike and rode south from Kirkwall, visiting the narrow sound where Kapitänleutnant Günther Prien, in command of U-47, entered Scapa and sank HMS Royal Oak with a torpedo.

The sky appears to be the dominating feature of most of my pictures, mainly because the Scottish sky is usually dramatic, cloudy but not completely overcast and hovering over a landscape that is mostly devoid of trees. And, of course, sheep.

A roll of 120 film contained 12 6x6 frames. It is the traditional Hasselblad format but useful in a simple Agfa, too. 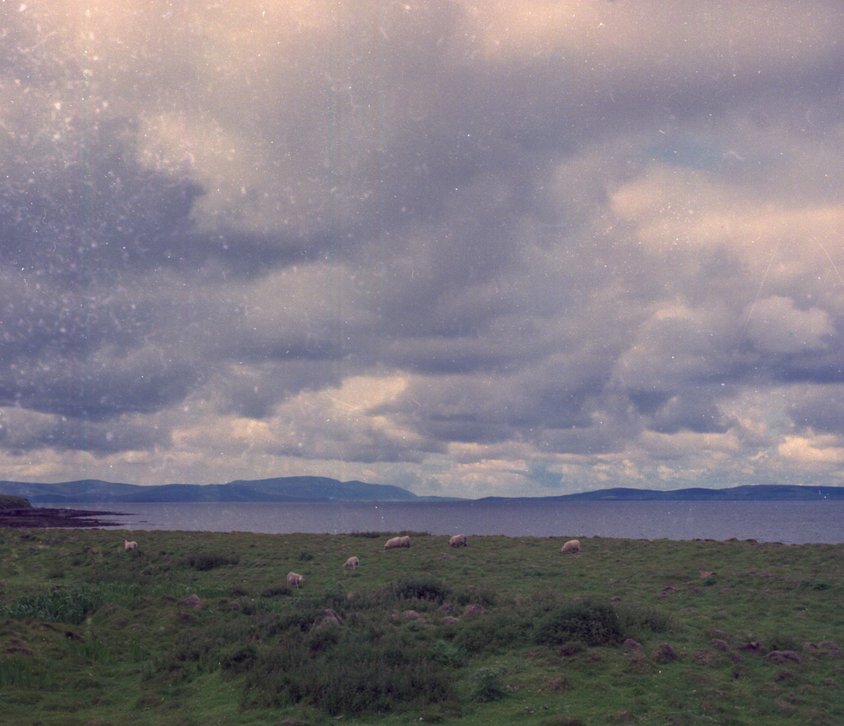 In the summer of 1975, Christina and I went on a short visit in Scotland, putting up at a funny hotel on the outskirts of Edinburgh; it was called "The Doric Hotel", its porch being adorned by two Jonian columns. It was under refurbishment; among other things, they were putting in a lift delivered by Swedish ASEA.The instructions were all in Swedish, so I had to help the technicians with an impromptu translation. On that trip I carried my first 35mm camera, a Rollei 35S, shooting in black and white. I intend to put a few pictures from that trip below, as soon as I have selected the best ones.